Mount Bromo is located in four administrative areas, namely Probolinggo, Pasuruan, Lumajang, and Malang. Mount Bromo which is located at an altitude of 2,392 meters above sea level is one of the tourist icons in East Java that attracts many tourists both domestically and internationally. This place is so famous among foreign tourists with the beauty of the sea of sand, caldera, golden sunrise and the view of the surrounding hills are very beautiful. The body shape of Mount Bromo is intertwined between valleys and canyons with calderas or seas of sand covering an area of about 10 square kilometres. Covered and surrounded by a 350-meter high hill. Mount Bromo has three peaks with the largest crater with a centerline of about 800 meters (north-south) and about 600 meters (east-west). While the dangerous area is a circle with a radius of 4 km from the centre of Bromo crater. The peculiarity of natural symptoms that are not found anywhere else is the presence of a crater in the middle of the crater (crater in the creator) with a stretch of the sand sea surrounding it.

The right time to visit Mount Bromo is during the dry season, which is between April and November, especially July-August. In the rainy season, it is often cloudy, thus disrupting the sunrise. But this place is crowded with visitors at least three times a year, namely in February during kasada ceremony, during Christmas and New Year holidays, and between July and August during the school holidays. On holidays visitors are crowded so the price of lodging goes up. Many tour packages to choose from as well as lodging facilities around Mount Bromo.

One of the unique ones in this region is the kasada ceremony which is attended by all tengger tribes living in these mountains. At this ceremony, the number of visitors can soar including various national and international media come covering. In addition to the traditional celebration called Kasada there is also a Karo ceremony, organized by tengger people. There are four normal routes to Get to Bromo, namely from Probolinggo via Cemoro Lawang, from Malang via Ngadas, from Pasuruan via Tosari, and from Lumajang via Senduro. The Probolinggo and Malang lines are the easiest, but the majority of visitors choose Probolinggo because it is easier.

Permits can be done at the three main points of access to Bromo, for the Tumpang line in Ngadas Village. There is a price difference for domestic and foreign tourists. Since June 1, 2013, for domestic tourists, the entrance ticket is Rp 10,000, including insurance, and cameras. While when carrying a handycam is charged Rp 20,000 per person. For foreign tourists the entrance ticket is Rp 72,500, and if you bring a Handycam of Rp 172,500. If you use a motorcycle to go to Bromo will be charged an additional fee of Rp 3,000 and four-wheeled vehicles will be charged Rp 6,000. If we want to enjoy the camping atmosphere, we have to pay a fee of Rp 20,000 at the licensing counter. Camp Ground can be found around Cemoro Lawang or there is a camping ground to the east of Luhur Poten Temple which is enough to accommodate about 4-5 tents. Lodging many choices from jasmine class to four-star. 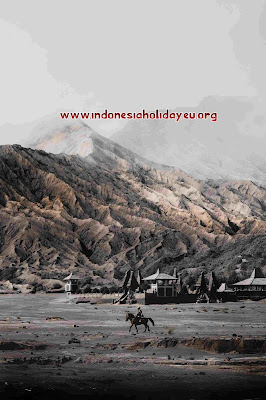 To reach Bromo area, it is recommended to bring or rent your own vehicle or follow the tour packages offered by some travel agents, because there is no special route of public transportation that can directly deliver to Bromo. In Malang, you can search for car hire with a price range of IDR 450,000. Many tour agencies and hotels can take care of car rental to Bromo. To get to Mount Bromo from Malang can first go to Tumpang, a small town that is about 25 km east of Malang. From Arjosari terminal take malang-tumpang rural transportation with a fare of Rp. 6,000. The journey can be reached for less than an hour to reach Tumpang. The road to Tumpang is quite nice and a little winding and up and down.

When using public transportation, only arrive at Gubugklakah Village, while to ride to Ngadas there is no public transportation, there is only vegetable transportation in the form of trucks or open jeeps. Smooth paved roads, ramps accompanied by several hollow sections along the way to Gubugklakah. Gubugklakah is a small village that includes the Poncokusumo Sub-district and is one of the producers of apples at an altitude of 1,100 m above sea level. After the village is marked by a goodbye gate and the journey will enter the forest with a path that begins to climb and meander. Towards Ngadas the atmosphere is getting cooler and the green expanse of mountains entertains your eyes. The closer to Ngadas Village on the left-right, the more visible the gardens with hilly surfaces. The road is now better because it has been done casting. To reach Ngadas Village, the journey can be reached in about 30-45 minutes or about 15 km. You can also stay overnight in Ngadas Village because there are many homestays and jeep rentals for transportation to Bromo.

After passing, Ngadas must be extra careful when passing through coban pelangi waterfall area because the road is uphill sharply. After that, it will reach the T-junction of Jemplang, a T-junction point that signifies the initial path down the hill to go to the sea of Bromo sand. This T-junction is characterized by the presence of a monitoring shelter. The journey from Ngadas Village to Jemplang can be reached in 20-30 minutes or about 6 km. If you go straight to Ranu Pani while if you turn left you will go to Bromo through Watu Kutho. Ranu Pani is the starting point for the ascent to Mount Semeru. Here there is a licensing post managed by the community under the auspices of Bromo Tengger Semeru National Park. We only show our identity cards here and fill out the guest book and contribute Rp 4,500 per person and pay Rp. 2,000 for each two-wheeled vehicle. The journey from Ngadas to Pananjakan takes about 1 hour. It is closer than Cemoro Lawang, but from Ngadas Village will pass through the savanna field first, Pasir Berbisik, then Bromo Crater. If from Cemoro Lawang even the opposite.

If we rent a jeep vehicle is charged according to what will be taken in the area of Mount Bromo. The jeep 4 x 4 WD has a capacity of 5-6 people. Here is the list of jeep transportation fares in the TNBTS area:

In the distance, you will see a savanna valley that lies so wide that it divides Mount Widodaren and Mount Kursi. This line is better now with the casting to the savanna plains. It takes approximately 10-15 minutes to go down this line. Although it looks very arid due to the sea of sand, behind Mount Bromo there is a vast savanna field and several hills that resemble Teletubbies hill. That's why it's called Teletubbies Hill. Along the way, there is a wide and clean expanse of grass. Plus the view of the hill on the right and left of the savanna field is really beautiful.

The next trip to Bromo Temple or better known as Luhur Poten Temple, is the starting point of the climb to reach the top of Mount Bromo. The journey from the savanna to Bromo Temple can be reached for 30 minutes if using a motorcycle or about 15 minutes if using a 4 x 4 WD jeep. To reach the top of Bromo takes 15-20 minutes, depending on physical condition. About the first 10 minutes in the form of a sandy road through small ridges, then up to the stairs that have been built to the top of Bromo. Arriving at the top of Bromo, the view becomes wider and amazing. The blue sky, the expanse of sand and Mount Batok as the companion of Mount Bromo on the northwest side, and Luhur Poten Temple with everything that looks small.

Bromo peak is a peak with a thin ridge bite and directly facing the Bromo Crater that always emits sulfur white smoke. On the side of the peak has been installed a concrete guardrail as a protector for visitors so as not to be mired into the crater. In the distance, we can see Mount Penanjakan and can see the cars leaving Bromo to Cemoro Lawang to return to deliver guests who mostly stay in the area of Cemoro Lawang inn, which means they depart from the Probolinggo line. The peak of Bromo is the endpoint of the journey, from whichever path we depart, and is the main attraction of this Bromo area. For those of you who are interested in hiking can go through Ngadas Village – Jemplang – Mount Bromo. Trekking to Mount Bromo in the form of paving roads with a width of two meters through the desert and savanna. Hiking can be done from the opposite direction, namely Bromo – Ngadas – Malang or Bromo – Ranu Pane – Ngadas. (Summarized from various sources)